skip to main | skip to sidebar

no
Posted by theponyproblem at 11:05 AM No comments:

i did not know what kind of bird it was

so i think the bird that smiled at me the other day was a european starling? it took me a while to figure that out. 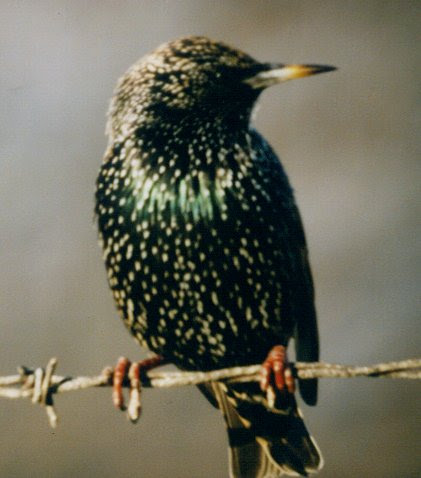 it smiled as i walked past it. and
Posted by theponyproblem at 10:35 PM 1 comment:

do not use force quit/cancel-force quit to manipulate your computer- i am pretty sure i broke mine today.
Posted by theponyproblem at 6:02 PM 2 comments:

i saw diary of chambermaid tonight and want to list the bunuel movies i have seen so i don't sound like an idiot for liking diary of a chambermaid so much.

the young one: terrible. ridiculous
belle du jour: don't like it much. this movie is a joke perpetrated upon the bourgeosie.
the milky way: about catholic heresies, deliciously confusing.
that obscure object of desire: this is "that movie" where two actress play the same character, alternating throughout the entire film. sorta cheesy. (reminds me of how nicholson baker's the mezzanine is "that book" where the entire narrative takes place in someone's mind during one escalator ride.)
diary of a chambermaid: totally awesome.

and i HAVE seen the discrete charm of the bourgeosie but it was a really long time ago. et cetera. olsson's books/records/dvds has started renting movies, which is so awesome. besides renting chambermaid, diary of a, i bought personal days and the tracy chevalier book about william blake. i love TC - the girl with the pearl earring and the lady and the unicorn rock my world, embarrassingly enough. also, she attended the same high school and college as me.

i hope this blog becomes a little more literary as i can't think of anything else to do with my life except attempting to write like books and stuff, at the moment. this is a good place to keep track of "literary stuff" since for a former writing major i don't know squat about publishing. come along with me as i try to get abreast of things. :)
Posted by theponyproblem at 11:51 PM No comments:

jo ann beard .
Posted by theponyproblem at 7:32 PM No comments:

this isn't actually about stockholm syndrome.

i had a dream that took place in new jersey the other night though. it was a bad neighborhood, there was a shootout, i hit the deck, the bullets just missed me.

i am going to read all the books on this list, i hope. excuse me this list http://believermag.com/issues/200805/?read=believer_book_awards i know how to make these lniks and use html
Posted by theponyproblem at 7:29 PM 6 comments:

this totally reminds me of everything about myself and my "friendships" and relationships. thank you SO MUCH [gratuitous] cory arcangel ['s web log/mention for david horvitz who doesn't read this blog].


Lunch Meeting from Amir on Vimeo.
Posted by theponyproblem at 7:18 PM 2 comments:

theponyproblem
I barely know how to use the internet